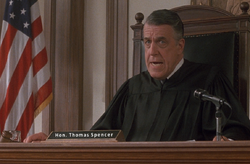 Thomas Spencer (born 29 April 1950) is an Associate Justice of the Court System of San Andreas. He was nominated to that position by the Governor and confirmed by the San Andreas State Legislature in April 2014, after having served 10 years as a district judge for the United States District Court for the Northern District of San Andreas. He is considered to be a conservative judge in terms of application of the law and is known for his opposition to judicial activism.

Spencer obtained his B.A., J.D. and L.L.D. at the University of San Andreas, Los Santos.

Retrieved from "https://lsrp.fandom.com/wiki/Thomas_Spencer?oldid=4920"
Community content is available under CC-BY-SA unless otherwise noted.